We’ve been huge fans of the Cartozia Tales anthology series. Now, they’re running a sale for the holidays. This is one comic that’s well worth picking up:

In the interest of making it easier for folks to give & receive Cartozia Tales here at the end of the year, I’ve set up sale prices on new subscriptions — whether you’re getting the little bonus books or not. (The sale includes nine- and eight-issue partial subscriptions for people who already have our first issue or two.)

And here’s something else: the first thirty subscriptions ordered during this holiday season will get a nice additional bonus: either our “Greetings from Cartozia” sixteen-postcard set, or a “non-canon” Cartozia story that is published on ten sendable postcards. (The second option is a comic by Isaac Cates and Mike Wenthe that’s part of the secret background of Cartozia Tales.) I’ll enclose these extras as supply allows, but if you want to state a preference, please do. 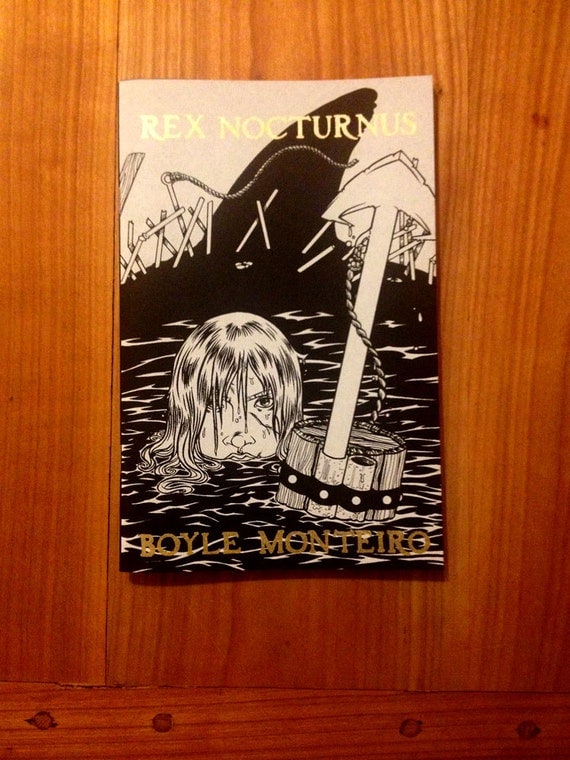 After a year in production, Scott Monteiro’s Rex Nocturnus is now available for preorder. The Kickstarted one-shot comic looks absolutely awesome, and Scott, in our mind, has put together one of the best original comics in the state. Here’s what it’s about:

Aboard an aging vessel, the Ocatavia, helmed by Captain Grayson and a small, tight-knit crew, Charly lives the only life she can remember: the Hunt. At a young age she lost her father and half her left arm in a vicious shark attack. Haunted by the loss of the peaceful life she once knew, she replaced her missing hand with a harpoon gun and has been trying to kill the beast ever since. But this is no ordinary shark, this is Rex Nocturnus. “The King” is a legend in this part of the world, feared by all who’ve so much as dipped a toe in the drink. Thought of as a god, the great black shark is whispered to have been roaming the seas for eons. Rex Nocturnus has long been deemed un-killable, a rumor led a large amount of credibility by the scores of broken, rusted harpoons sticking out of it’s back. But you just can’t tell some girls “no”. . .

You can head over to his Etsy page, where you can grab a copy of the comic for $10, as well as a number of prints and limited editions.

If you’ve been catching the ads and trailers for Marvel’s next blockbuster, Guardians of the Galaxy, you too might be asking “Who the heck is this Star-Lord guy, anyway?” Mike Luoma’s been writing about the character over at Comic Related – follow the link to learn more about Marvel’s Star-Lord in Mike’s latest “Cosmic Crackle” column. 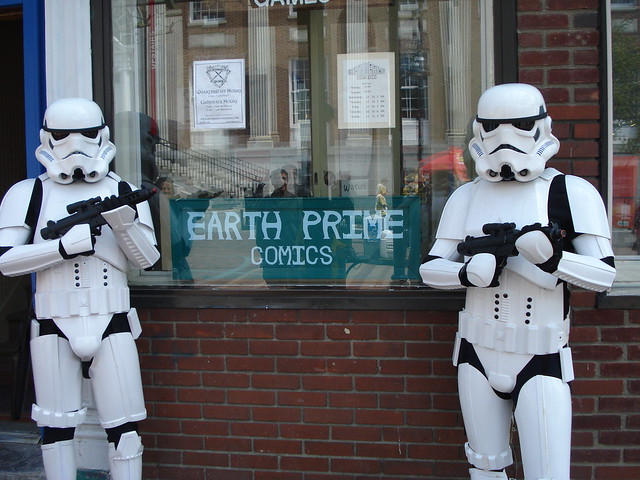 We had a question come through on our facebook page when we posted up about Free Comic Book Day events earlier today, and we realized that we don’t have a good grasp on precisely what stores are out there in Vermont. There’s the usual and very well known places that pop up almost daily for us on the Geek Things reports, and then there’s… others.

We did some research and came up with a list of places that may or may not exist. Now, it’s your turn. Help us build a solid list!

So, help us confirm what’s in the state! We’d be interested in hearing about some of these unknown stores, and getting confirmation that Heroes Kingdom is indeed closed. Is there a place that’s missing?

The Center for Cartoon Studies will host Jeff Danziger for an interview with Tom Tomorrow. Danziger has recently released a book titled The Conscience of a Cartoonist, described as a ” a searing account of America in the aftermath of 9/11″. The talk will take place on Thursday, April 17 at 7:30pm at the Norwich Congregational Church in Norwich.

JEFF DANZIGER is a political cartoonist syndicated by The New York Times worldwide. Originally from Vermont, Jeff lives and works in New York. He was finalist for 1993 The Pulitzer Prize, awarded the 2006 Herblock Prize, the 2008 Thomas Nast Prize, and is a decorated Vietnam veteran. He has produced ten books of cartoons, a children’s book, The Champlain Monster, and a novel about the Vietnam war.

TOM TOMORROW (A.K.A. DAN PERKINS) is the creator of the weekly political cartoon, This Modern World, which appears in approximately 80 newspapers across the U.S., and on websites such as Daily Kos, Truthout and Credo. He received the firstplace Robert F. Kennedy Award for Excellence in Journalism in 1998 and in 2003.

This looks like it could be quite the event. Cartoons and satire are excellent means of expression, and the last decade has brought a wealth of material to examine, criticize and contemplate. This event is free for all.

This is pretty awesome: a comic released this week from Marvel finds Spiderman and Wolverine chatting in Rutland, Vermont. I haven’t been keeping up with the comics world lately, but it seems that Peter Parker has escaped the superhero lifestyle and the confines of Rutland. Apparently, the folks at Marvel haven’t yet read Rolling Stone’s article on heroin in Vermont, or they would have relocated him elsewhere.

Edit: the issue in question is What If? Age of Ultron #2, released earlier this week!

It’s fun to see this: Rutland has a real history in the comic book industry, with heroes popping up every now and then, and even featuring the annual Halloween parade.

The Center for Cartoon Studies will be hosting a lecture by famed artist Alison Bechdel on April 10th from 4:30 pm to 5:30 pm.

Alison Bechdel is the creator of the long-running self-syndicated comic strip Dykes to Watch Out For. She came to critical success with her graphic memoirs Fun Home: A Family Tragicomic and Are You My Mother?: A Comic Drama. Bechdel edited Best American Comics 2011, and has drawn comics for Slate, McSweeney’s, Entertainment Weekly, The New York Times Book Review, and Granta. She is also a recipient of a Guggenheim Fellowship.

The event will take place across the river in Hanover, at Dartmouth College’s Life Sciences Building, Room 100.

Word’s getting around that Vermont’s getting its own comic convention in the fall: Vermont Comiccon. Information is sketchy at the moment, beyond the date and place: October 25th and 26th at the Sheraton hotel in South Burlington. The convention’s Facebook page is doling out guest announcements as they come. The prospect of a new convention in Vermont is pretty exciting, so we’re all keeping our eyes peeled for more information as it appears.

Addition: Throughout the 1980s, Greg Giordano ran four instances of Greeen Mountain Comicon, which included guests such as Vermont’s own Steve Bissette, Rick Veitch, Eastman & Laird and several other Mirage Studios guys, Mark Shainblum(Northstar) and Bernie Meirault(The Jam) and others.

Geek conventions in Vermont go back to at least the 90s, from my own personal experience. They’ve never approached the scale of mega-conventions like San Diego Comic Con or Gen Con, owing to Vermont’s population density and the facilities available to host such gatherings. Instead, Vermont conventions tend to be more about catching up with friends you don’t normally get to see, and discovering you share an interest with near-by neighbors.

Crisis Comics hosted comic shows in the Burlington area, which for me, in an age before the ubiquity of online sales, was a bonanza of picking up back issues that local dealers didn’t have. Quarterstaff Games hosted seven occasions of Northeast Wars, all about tabletop gaming. After Northeast Wars became dormant, Carnage picked up the tabletop convention torch and carries to this day in the Upper Valley of Vermont and New Hampshire. The Society for Creative Anachronism’s shire of Panther Vale — comprising the northeast quadrant of Vermont — began hosting Pantheria, a weekend-long outdoor gathering, in 1996.

In 2002, Bakuretsucon kicked off as a combination anime and gaming convention in the Burlington area. After a couple years, gaming spun off as Lore Con, while Bakuretsu focused on anime and moved to the fall, steadily growing in vibrancy every year as they descend upon Colchester. Northeast Wars briefly revived for a couple years, before returning to dormancy. The oft-missed Langdon Street Cafe in Montpelier hosted Geek Week annually until its final closing, dedicating each night of a whole week to a different area of geekiness. Green Mountain Gamers formed in 2010 to host mini-convention style game days throughout the state all year round.

Of course, those are only the conventions and convention-like events of which I’m aware. There are few works on the subject, none of which focus on Vermont in particular. If you have memories of conventions past, or information of conventions to come, share in the comments below.

Local comic writer Brandon Barrows is working on a new, fan-funded endeavor, and needs your help!

RED RUN tells the story of the McConnells, a down-on-their-luck family desperately in need of a fresh start. Packing only what will fit into a trailer, young parents Becky and David move their two small children, Dina and Ben, out of state to an unassuming town somewhere in America’s heartland in order to seek employment. They rent a cheap apartment and make a surprise discovery in their new home that seems like a dream come true, only for it to be the beginning of Becky’s nightmares.
This is a story that we (Brandon and Joel) feel needs to be told, but we need your help. We are seeking to raise $1000, just over half of what the total cost of doing this book will run. I (Brandon) am paying the other half out of my own pocket and the funds raised here will go to paying Joel for his time, effort and the supplies neccessary to pencil, ink and color the comic as he is a working artist with a family to support. I am not taking any page rate as writer of the book and if, through donors’ generosity, we exceed our goal,the excess over $1000 will go towards the rest of cost of producing the book and towards the cost of lettering.
As much as we need your help, we want to give something back in return, as well. Donation gifts include special “IndieGoGo Thank you” versions of the comic (in print and digital formats), exclusive prints, ORIGINAL production art, ORIGINAL sketches and even a chance to see YOUR name listed in the comic’s credits!