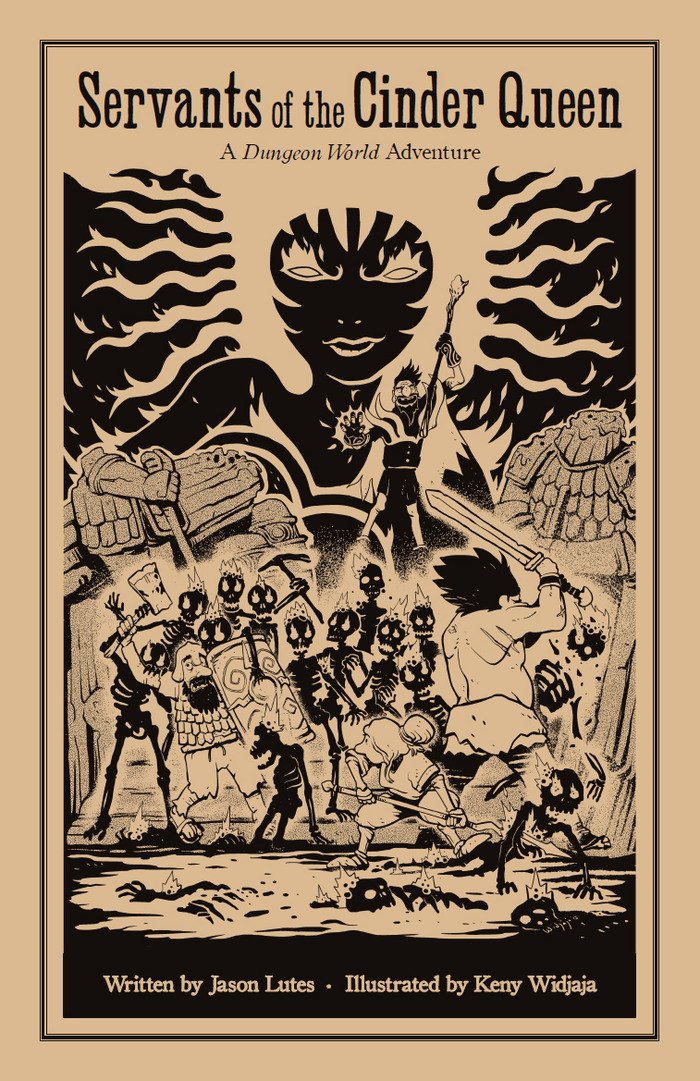 Jason Lutes, a cartoonist and professor of comics at the Center for Cartoon Studies in White River Junction has just launched a Kickstarter for Servants of the Cinder Queen, an adventure for the role-playing game Dungeon World. In the last couple of days since the project’s launch, he’s been competely funded! Here’s the story:

There once was a monastery perched high on a slope of the mountain called Hvitr’s Horn. The warrior-monks who dwelt within were dedicated to the god Hvitr—lawful god of storms and justice—and entrusted with the stewardship of holy artifacts and texts. But above all else they were gatekeepers; for Hvitr’s Horn was an active volcano, and thus (like all active volcanoes) a gateway to Ellorash, an elemental plane of fire. The end of this brotherhood came with an eruption that spewed forth the Flaming Host of Ellorash, an otherworldly legion led by the demi-goddess Gildarthe. Legend holds that Hvitr himself descended from the heavens to beat back Gildarthe and seal the planar gateway, but not before the monastery and all within were drowned in a flood of lava.

Now, 300 years later, the steading of Meervold, at the foot of Hvitr’s Horn, has entered a dark time. Villagers are disappearing. Strange lights are seen on the cold slopes. Distant screams echo through the night. The Council of Elders is broken and powerless, and those who have not fled Meervold remain only because they are paralyzed with fear.

What secrets lie beneath the ruined monastery? Are any of the missing villagers still alive? Is there any truth to the rumors of holy artifacts locked within the mountain?

Only a fool or an adventurer would dare seek the answers!

$3 gets you access to the Beta (PDF download), while $6 gets you a hard copy of the finished product. 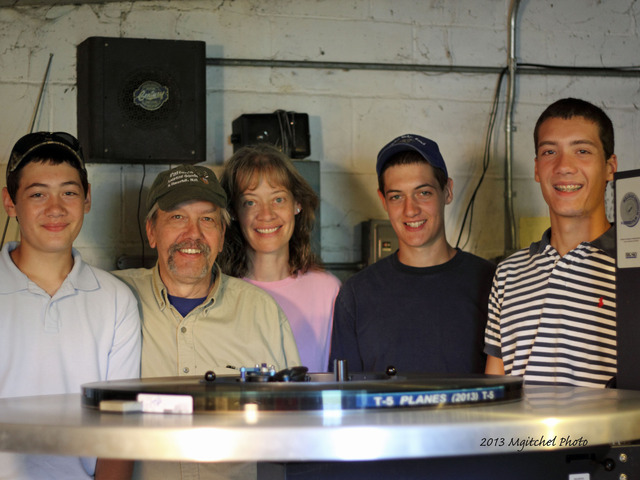 This kickstarter has appeared before, and now they’re trying again:

We are an iconic drive-in theater searching for a way to pay for the movie industry’s switch from 35mm film to digital.

We are an iconic motel/drive-in theater serving small rural communities in the Upper Valley of the Connecticut River, in Vermont and New Hampshire, searching for a way to pay for the movie industry’s switch from 35mm film to digital.

We’re one of only two motel/drive-ins left in America — and we’re looking for you to help save an incredibly rare species: us.

Our drive-in & motel also has the unique addition of a snack shack open during movie times that serves our own “Thunderburgers” made from beef from our own cows. Yes, our family, the Trapps, own a farm just across the river from Fairlee, and when we’re not busy with the motel or theater, we raise our own cattle. Even the coffee, butter, and whipped cream we serve is from Vermont. 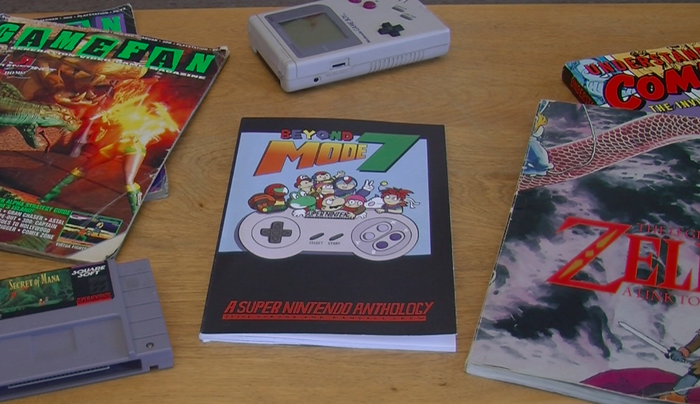 Vermont comic artists Jesse DuRona and Randall Drew are looking to release their comic anthology titled Beyond Mode 7: An SNES Comics Anthology. The art and writing for the book is done, and now, they’re looking for $3000 to print the book and release it to readers.

Beyond Mode 7 is a comics and art anthology celebrating the Super Nintendo Entertainment System and how it shaped our creative lives!

Co-edited by cartoonists Jesse DuRona and Randall Drew Beyond Mode 7 is a comics and art anthology based on the SNES. It has been about 2 years in the making and features original work from over 15 artists and writers!

The book is complete and ready to go to print, what we’re KickStarting are the funds to produce the printed version! With over 75 pages of content, much of it in color, we’re hoping to raise enough money to produce 150 perfect-bound copies!

These copies will not only cover Kickstarter rewards, but also the contributor copies that we will be sending out to each artist that provided artwork for the book!

Every dollar raised is budgeted very carefully to cover reward printing costs, packaging, shipping KS fees, and other supplies needed to produce each reward. Our goal is to print and produce as many copies of the book as possible and to put it in as many hands as possible! 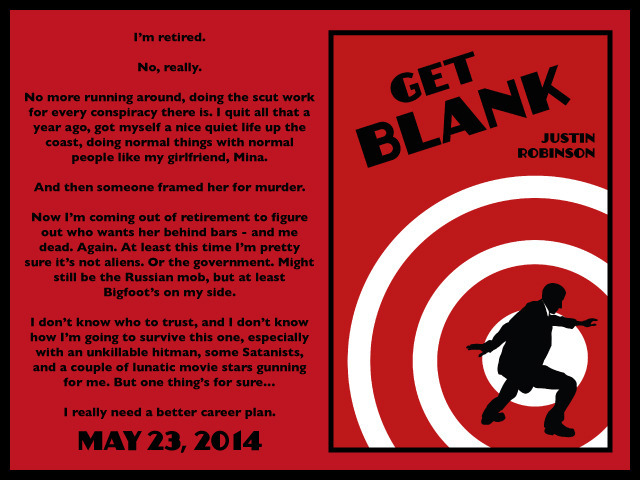 Bennington publisher Candlemark & Gleam has a new book set for release, and they’ve once again turned to Kickstarter to get ready for the print release. The book is Get Blank, by Justin Robinson. It’s the sequel to Mr. Blank.

Here’s what it’s about:

I’m retired. No, really. So why am I running through LA, trying to dodge every conspiracy there is to stay alive? Oh, right. I’m me.

I quit running around, doing the scut work for every conspiracy in the Information Underground, a year ago. Got myself a nice quiet life up the coast, doing normal things with normal people like my girlfriend, Mina.

And then someone framed her for murder.

Now I’m coming out of retirement to figure out who wants her behind bars – and me dead. Again. At least this time I’m pretty sure it’s not aliens. Or the government. Might still be the Russian mob, but at least Bigfoot’s on my side.

I don’t know who to trust, and I don’t know how I’m going to survive this one, especially with an unkillable hitman, some Satanists, and a couple of lunatic movie stars gunning for me. But one thing’s for sure…

$20 gets you a trade paperback with more rewards the higher you pledge. Interested? It’s already funded with 24 days to go, so preorder your copy today!

Randolph’s Playhouse Movie Theater is one of many movie houses all over Vermont facing the leap to digital projection. As the movie industry phases out distributing films on film in favor of cheaper, more efficient hard drives and digital files, it falls to theater owners to replace their projection equipment in order to screen those films.

Visit the Kickstarter page to learn more about the fundraising efforts, of which crowdfunding is only a part, and the people behind the effort.

Over on Kickstarter, Vermont-based game designer Michael Bujtas is raising funds for Masquerade, a combination card game and novel. He describes it as:

… a two pronged project that includes a deep story with a slew of interesting characters told through both a card game and a novel. There is a dark plot to assassinate the king of Avalot, and no one knows who is involved. In the game, you may protect the king or join in the murder, while in the book the conspiracy goes deeper than it appears on the surface.

The Masquerade card game is a party game for those who enjoy mayhem and fun. The Masquerade novel offers a larger perspective on the seemingly nonsensical entertainment. Both mediums offer surprisingly vast themes. Everything, from the art, design, and writing, has been done by one man, Michael Bujtas (age 21).

The project has nine days to go and less than $500 left to raise, so achieving the funding goal is very doable. Best of luck to Michael. We’re pulling for the project’s success. 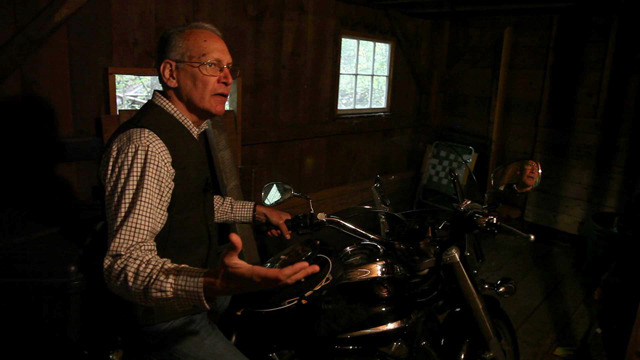 Archer Mayor has joined up with Emergent Media Center to work on a game based Archer Mayor‘s Joe Gunther series! The game will be an episodic adventure mystery that involves real detective work, collecting clues and evidence. Here’s the write up from the Kickstarter Page:

Archer Mayor’s Lost Case Files is an episodic mystery video game where the player takes on the role of a rookie detective under the watchful eye of seasoned investigator Joe Gunther. The game offers a genuine look into the world of real police procedure in the gritty style of bestselling author Archer Mayor, who the New York Times called “the boss man on procedures.” Players will investigate crime scenes, track down suspects, and construct a case thorough search, inquiry and deductive reasoning. It’s a game where your choices matter and you have control over the investigation.

The Lost Case Files is a unique take on the detective game genre, enabling players to do real detective work instead of being guided through the steps. You cannot spend time investigating every possible lead, unlike many traditional adventure games, because players are challenged to use time correctly before the trail goes cold. Each action performed, whether it is questioning a witness or processing evidence, will deplete your primary resource: time. Players must solve the case quickly and efficiently to gain an understanding of what it takes to really solve a crime.

Using Archer’s wealth of experience in police procedure, the game will let players explore how real detective work is done in the field. Players will be the detective, collecting evidence and deciding whether or not to follow up on a lead. Investigating leads takes time, but also opens a new location with more possible clues and conversations to discover within the Joe Gunther universe.

Archer Mayor is a bestselling author from Newfane, Vermont. For the past 23 years, Archer has been crafting his Joe Gunther series; a collection of police procedural detective novels set in Vermont. The books are known for their gritty realism and true-to-life detective techniques. Archer has been able to bring this quality of realism to his writing because he lives the life of a medical examiner and a detective. He is known for his exceptional accuracy in realistic police procedure, and aims to bring the same accuracy into the digital world of mystery-based video games.

Head over to their Kickstarter Page to get the full story, see their video and pledge!

Companions of the Firmament art. Used with permission.

As the Companions of the Firmament Kickstarter ends its final five days, Geek Industrial Complex has unleashed a final challenge:

Here is a final stretch goal to add some drama as we come in for a landing. If we get to $3500 then a final creature sheet will be commissioned that will focus on vehicles, magic items and constructs that focus on flying.

Geek Industrial’s had an impressive fundraising campaign, particularly considering Companions of the Firmament will expand an existing role-playing game, rather than being a standalone product. All in all, it’s been a great showing for Vermont game designer Neil Carr. Here’s to many more successful crowdfunding efforts for Geek Industrial Complex and other Vermont-based creators.

Companions of the Firmament art. Used with permission.

With 11 days left to go in the crowdfunding campaign, Geek Industrial Complex’s Kickstarter for the role-playing supplement Companions of the Firmament has passed the second of its stretch goals for providing prefigured sheets for the flying monsters of the Pathfinder role-playing game.

There are a lot of flying mosnters already published for Pathfinder, well over four hundred. These monster sheets will allow GMs using Companions of the Firmament‘s expansion to flying movement to more easily include existing creatures in sessions without a lot of prepwork.

Congratulations to Geek Industrial Complex for their continued success! These stretch goals add value to the project for all backers, so reaching each one makes the book better for everyone.

We told you about the Kickstarter for Emacsy, which would bring an Emacs way of doing things to other software applications, launched by Shane Celis, a student at the University of Vermont. While the project failed to achieve funding, Celis updated backers afterward saying that during the course of the funding campaign, Richard Stallman, father of the free software movement, not only remarked that Emacsy “looks useful,” but asked if Shane would consider making Emacsy an official GNU project.

Even without having reached funding, it sounds like there’s a way forward for Shane’s project. We wish him luck!